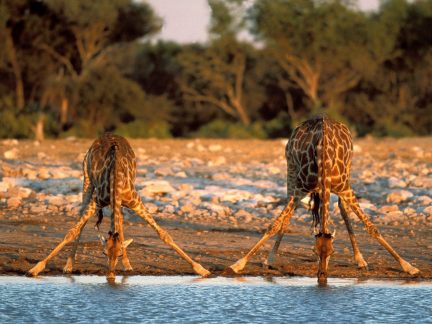 If you have ever done a handstand or hung upside-down, you know the feeling of the blood rushing to your head.  This is not a big deal for people, but it should be a problem for giraffes.  Think about it.  The giraffe is the tallest animal in the world (up to 20 feet) and has a neck about 7 feet long.  Your heart pumps blood up about a foot.  A giraffe’s heart has to pump blood up 7 feet!  A normal person’s blood pressure is 120/80.  A giraffe’s normal blood pressure is around 240/180, which is the highest of all animals (Jakhariya).  If our blood pressure gets up to just 180, it is called a hypertensive emergency and must be lowered immediately or it can result in permanent organ damage and death.  The question is, with such high blood pressure normally, why doesn’t a giraffe damage its brain or kill itself when it bends down?  The answer is found in a number of uniquely designed parts.

1. An Enlarged Heart.  To get the blood to its head in the first place, the giraffe needs a large and powerful heart.  Your heart is about the size of your fist.  A giraffe’s heart is about 2 feet long and can weigh over 25 pounds (Prothero).  Its heart is also very powerful.  “For blood to reach the head, the heart must beat strongly enough to overcome the significant downward pressure caused by gravity” (Bourton).  Its heart also pumps 16 gallons of blood per minute.  The giraffe certainly has the right heart for the job.

2. Valves.  When a giraffe bends down, there are two problems.  (1) The increased blood pressure coming from the heart caused by gravity, and (2) the blood that has already passed through the brain and is now being pulled back by gravity.  To correct the issues caused by gravity, the giraffe has special valves in the main veins of the neck (jugular veins) which automatically close when the giraffe bends down and open when it lifts back up.  This significantly reduces the pressure in its head when it bends down. This really only corrects the gravity issue though. The next two features help with the rest of the blood rushing to the brain.

3. Blood Vessels.  The walls of these main vessels are extra thick and continue to grow thicker as the giraffe’s neck grows and the blood pressure increases (Bourton).  The thick walls keep the vessels from rupturing under all the pressure.  Besides this, the giraffe’s blood vessels have elastic qualities.  So, the giraffe’s vessels will expand and contract to change the volume of blood flowing to the brain when it bends down.  Doing so decreases the pressure in the brain.

It takes all of these features just for a giraffe to bend down to get a drink of water and raise back up!  This puts evolution in a difficult position.  If the giraffe did not have a strong enough heart, it could not get blood to its brain and would not survive.  If the valves in the blood vessels did not contract and close off, too much blood would rush to the giraffe’s brain and it would not survive.  If the giraffe did not have the sponge like maze of blood vessels (rate mirabile) and did not have special vessels that could expand and contract to control blood pressure, the giraffe’s brain would be damaged and it would not survive.  So, which evolved first?  Every one of these parts has to work together flawlessly in order for the giraffe to survive.  Every one of these parts is essential for it simply to get a drink of water.  Taking any one of these qualities out would drive giraffes to extinction.

Giraffes are proof of intelligent design and of a God who has the knowledge and power to make every single part work flawlessly.  David was right when he said that all of our creation declares God’s glory (Psalm 19:1-6).  Certainly the giraffe is one of the many parts of creation announcing God as Creator and Lord!

9 thoughts on “Why Giraffes Don’t Have Brain Damage”