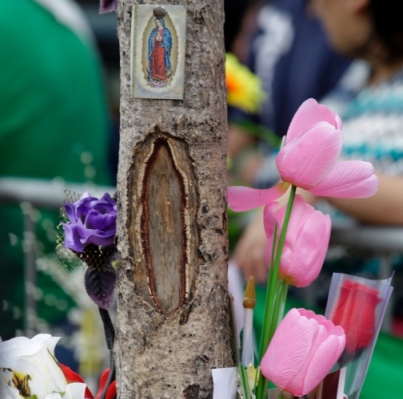 When I was a child, I would lie on the grass and stare up at the clouds.  My imagination would run wild and I began to see clouds in the shapes of dogs, swords, dragons, turtles, and other fascinating images.  People have been seeing images all around for thousands of years.  Until recently, I had no idea how often people saw strange religious images in everyday objects.  There is the “Shroud of Turin,” the “Christ Oyster,” the “Mother Teresa Cinnamon Bun,” the “Jesus Frying Pan”, the “Pope in the Flames,” the “Jesus Toast,” the “Christ Oyster,” Jesus on the rear end of a dog, and a host of others (See Images Below).

The most recent of these religious images is the silhouette of the Virgin Mary found on a tree in West New York, N.J.  So many people gathered to see this image, the police had to set up barricades to keep the people waiting in line from interfering with traffic.  One of those who gathered, Barbara Questel, said, “As soon as I got here, I felt this rush when I saw it, this rush from my body.  It’s such an amazing feeling” (NBC News).  Many worshiped, prayed, cried, and kissed Mary on the tree, convinced this image was a miracle from the Lord.

Throughout time, people have often asked and looked for miraculous signs (Judges 6-7; Matthew 16:1-4; Exodus 4; etc).  Clearly people are doing the same today.  But are these images miraculous signs from God?  Is this how God communicates with us today?  Let’s look at a few points:

1. The Bible.  Despite what many teach and believe, God’s written word is the only way God still communicates with us today.  According to Scripture, everything we need to know and obey as Christians is found in the Bible (2 Peter 1:3; 2 Timothy 3:16-17).  This means God no longer communicates through prophets, speaking in tongues, and miracles (1 Corinthians 13:8; Zechariah 13:2; Hebrews 1:1-2).  This includes communication through random religious images.

2. Contradictions.  If we put any credibility behind images like these, we have to deal with the overwhelming number of contradictions.  Christian images haven’t been the only ones found.  Images have been found of the Hindu monkey deity and other divine Hindu spirits (Wikipedia).  Muslims have found numerous images of their most cherished word “Allah” (Wikipedia).  Evolutionists have found an image of Charles Darwin (theonion.com).  To make things more confusing, images of George Washington and other well-known people have also been found (DigitalSpy.com).  If these images mean anything, which ones are we to follow?  All of these different people and religions are contradictory to each other and many to Scripture itself.  Also, what do these images mean?  All of these images are completely subjective and open to anyone’s interpretation and speculation.  The only logical solution is that these images mean nothing and are just interesting.  These images should be viewed as random and haphazard, not as some miraculous revelation from God.

3. Legitimacy.  No one actually knows what Jesus and Mary looked like.  What people find on the Shroud of Turin, trees, and pieces of toast are simply what they imagine Jesus, Mary, and others might look like.  In addition, God has filled our world with breathtaking proofs and evidences like the intricacies of eyes, ears, the human brain, the sun, stars, and extraordinary animals (Humming Birds, Bats, Giraffes, etc).  So why would He use burnt toast, a dirty frying pan, bird droppings, or the rear end of a dog to prove or show Himself?  Isaiah 55:8-9 seems to capture the contrast between peoples’ thinking and God’s thinking quite well, “‘For My thoughts are not your thoughts, nor are your ways My ways,’ declares the LORD.  ‘For as the heavens are higher than the earth,  so are My ways higher than your ways and My thoughts than your thoughts.’”

To be blunt, it’s utterly ridiculous to put any weight behind such images.  Jeremiah 10:23 states, “I know, O LORD, that a man’s way is not in himself, nor is it in a man who walks to direct his steps.”  God communicates with us through the Bible and directs our steps through Scripture alone because we are not capable of doing it with out His direction (Jude 3; 2 Timothy 3:16-17; Galatians 1:8-9).  When we see these random images in the clouds, on trees, or anywhere else, let’s chalk them up to perspectives of people’s funny imaginations.  But when it comes to the eternal matters of religion and doctrine, let’s look to God’s only source of communication, the Bible (Revelation 20:11-15; John 14:48).

HERE ARE SOME OF THE IMAGES: 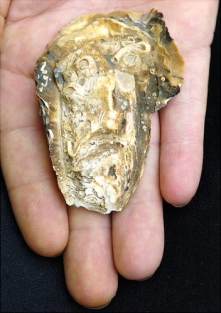 The “Pope in the Flames” 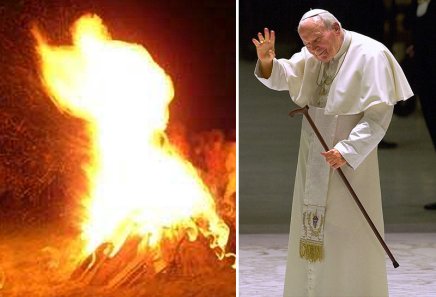 The “Shroud of Turin” 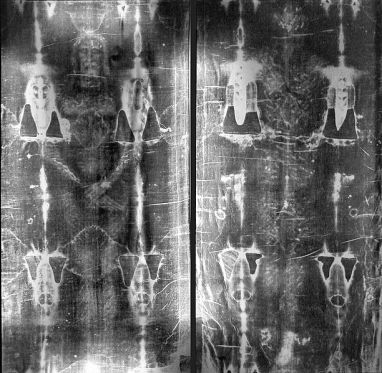 The “Nun in the Bun” (Mother Teresa Cinnamon Bun) 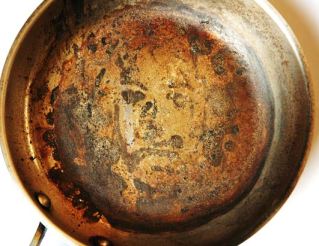