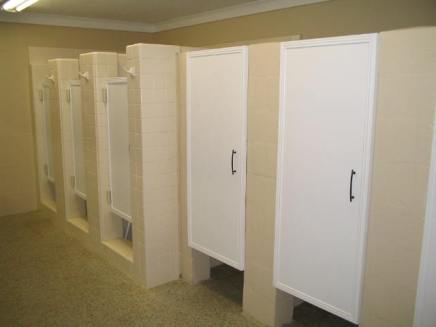 Have you ever read the messages inside the bathroom stalls? They can be, well, interesting to say the least. You could come across everything from jokes and philosophical statements to gang signs and crude remarks. If you have ever had the joyful experience of sitting in a murky, run-down gas station stall, you may have feared for your safety. No matter the location, the messages are certainly unique.

Normally a bathroom stall wouldn’t be the place to learn a spiritual lesson, but there are exceptions. A college student went into the bathroom stalls at the university she attends. This particular stall was full of messages. As she began reading the messages, she noticed a particular theme. This stall was being used almost like a journal by the young ladies. Many girls had written about their experiences with rape, eating disorders, dealing with an alcoholic father, and even the death of one girl’s father. This stall had become a snapshot of these girls’ most horrifying moments.

The college student was touched by these confessions and decided to write something in response. She penned a letter of encouragement, addressing each girl specifically, and taped it up in the bathroom stall (Read Her Letter Here). It’s uncertain if any of the troubled girls read this letter, but later on, at the bottom of the page someone wrote in response, “To the person who wrote this, thank you.”

Despite the fact her letter was put in a bathroom, this girl demonstrated what good encouragement is all about. Her encouragement was sincere and personal. She gave it freely and generously, even to people who may never read it. No one forcer her to do this, she did it out of kindness and good intentions. This girl demonstrated an attitude of encouragement; an attitude that must be found in us as Christians. Hebrews 3:13 explains, “But encourage one another daily, as long as it is called today, so that none of you may be hardened by sin’s deceitfulness.”

If given the opportunity, what would people at your congregation write in the bathroom stall? What horrors might they confess? What cruelty have they experienced? Only the Lord knows what would show up.  One thing is for certain though, most people need encouragement. And we have a duty to encourage. After all, doing so can prevent people from being “hardened by the deceitfulness of sin.”

There is no telling how many lives could be touched, changed, and improved if we just encouraged more. So let’s give encouragement freely and generously. Let’s make our encouragement sincere, specific, and personal. But above all, let’s make encouragement a constant fixture in our lives and speech.

Homework – Think of 5 people and encourage them this week.