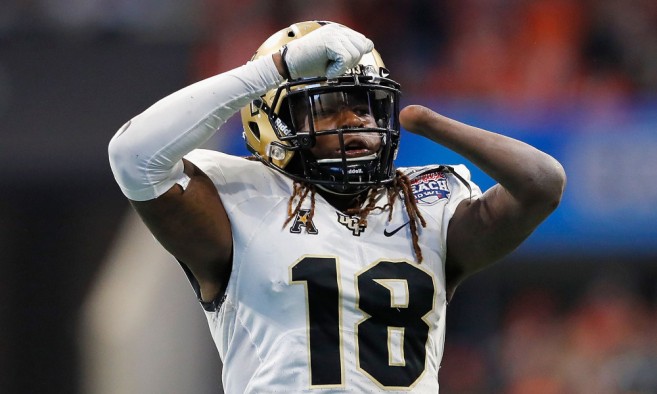 Shaquem Griffin made history when he was drafted by the Seattle Seahawks in the 2018 NFL Draft. As a young boy, Griffin had his left hand amputated, now making him the first player to be drafted into the NFL with only one hand.

Athletically, Shaquem is no slouch. In fact, there will be few people on the football field who will be able to keep up with his blazing speed (he ran a 4.38 at the combine). To date, no linebacker has ever officially run faster than Griffin. In 2016, he was the American Athletic Conference’s Defensive Player of the Year. In the last two seasons, he has posted an impressive 33.5 tackles for loss and 18.5 sacks (Yahoo Sports).

We can only imagine what Griffin has had to endure throughout his life, but one thing is for sure, he has made it through. He could have let this difficulty define him. He could have let his problems crush his motivation. From all appearances, having one hand hasn’t slowed him at all. If anything, it’s only driven him more. If there is anything we know about Griffin, it’s that he has had to work extremely hard to reach this level. Being the first NFL player with one hand, he couldn’t have reached this point without extensive hard work.

There are few of us who can really appreciate the effort Griffin has had to put in. And yet, even though we are whole physically, we often have a work ethic that is full of holes. We procrastinate. We make excuses. We chose the reward before we’ve even done the work. In addition, we’ve become conditioned for a constant need for fun, entertainment, and to stay amused. In this age of technology, we are literally striving to “never have a dull moment.”

Just about all of us can improve our work ethic. If anyone should stand out as hard workers, it’s Christians. Let’s put aside our excuses. Let’s get past our constant need for entertainment. Let’s put our hand to the plow, because in the end “it is the Lord Christ whom you serve” (Colossians 3:24).