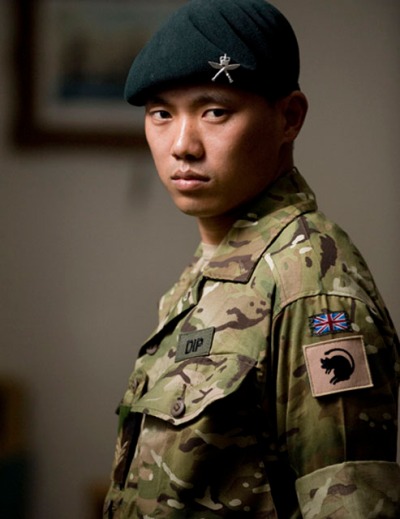 A Nepalese soldier in the British army, Dipprasad Pun, was stationed as a lone sentry. Corporal Pun noticed approximately 30 Taliban fighters closing on his position. He told reporters later, “There wasn’t any choice but to fight. The Taliban were all around the checkpoint. I was alone….I had so many of them around me that I thought I was definitely going to die so I thought I’d kill as many of them as I could before they killed me.” In this 15-minute attack, Pun was surrounded and almost constantly fired upon by AK-47s and even rocket-propelled grenades. He endured the 30 soldiers by firing off more than 400 rounds, launching 17 grenades, detonated a mine, and even using his machine gun tripod to hit a Taliban soldier when he had run out of ammunition. Despite this vicious assault from the Taliban, Pun emerged unscathed. He was recently honored with the Conspicuous Gallantry Cross (CGC). The CGC is Brittan’s highest honor for bravery and second only to the Victoria Cross.

While we are not enduring AK-47s and rocket-propelled grenades, and hopefully never will, we are attacked in other ways. Sometimes we have to fend off personal attacks on our character. Sometimes we are attacked by the hostile agendas of our culture. However, of all the attacks that come our way, by far the worst is the attack of sin. These attacks are often vicious and difficult. We can feel bombarded and overwhelmed. Like Corporal Pun, we must bravely defend ourselves against all such attacks. Remember, we are protecting the most precious possession we have, our souls (Matthew 16:26).

Let’s keep in mind the powerful and familiar words of 1 Peter 5: 8-9, “Be of sober spirit, be on the alert. Your adversary, the devil, prowls around like a roaring lion, seeking someone to devour. But resist him, firm in your faith, knowing that the same experiences of suffering are being accomplished by your brethren who are in the world.” Satan is a fearful enemy, but we must do what it takes to resist his attacks (Ephesians 6:10-17). While we will not receive a prestigious medal for defending the attacks of sin, if we stay faithful to the end, we will win the most highly esteemed reward of all, the crown of righteousness (2 Timothy 4:7-8).