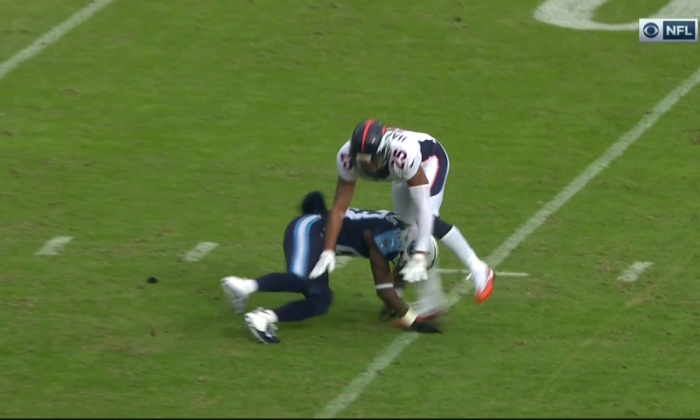 Let’s just go ahead and get this out of the way, I’m a huge Broncos fan. Always have been. Always will. So, it is entirely possible that this is coming from a place of bias, but there are plenty of less biased people who agree. We’ll get to that, but first, here’s what happened.

This past Sunday the Broncos played the Tennessee Titans. In the second quarter, the Titans ran a routine run play that gained about 6 yards. On the back side of the play, with it looking like play wouldn’t come their way, Titans wide receiver Harry Douglas slowly trotted up to Broncos corner Chris Harris, arguably one of the best corners in the NFL. Clearly, neither player was going at full game speed since the play wasn’t near enough to their area. Suddenly, Harry Douglas launched himself helmet first, directly at Chris Harris’ right knee. Harris’ knee bent back awkwardly. He went to the ground clutching his knee, clearly in pain. Everyone feared the worst. The trainers rushed out and tended to Harris who remained down. Thankfully, there was no significant injury and Harris was able to later return to the game. With the change of just the smallest of details, this play could have ended Harris’ career (Watch The Play Here).

Louis Riddick, with Mike and Mike agreeing with him, called the play “absolute trash.” Stephen A. Smith called for Douglas to be suspended. Ryan Clark and Herm Edwards both expressed that it was legal but unnecessary and violates an unwritten code of respect. Shannon Sharpe called the play dirty. Technically, what Harry Douglas did was lawful. He didn’t violate any official NFL rule. Unofficially, what he did was cheap, dirty, nasty, and downright ridiculous. Thus far Douglas hasn’t received any fines or discipline.

Like with many parts of life, there are times when something appears to fall into a sort of “gray area.” Spiritual and moral issues aren’t exempt from this. For things like these, the inspired Paul said, “All things are lawful, but not all things are profitable. All things are lawful, but not all things edify” (1 Corinthians 10:23). In other words, there may be some decisions we could make that technically don’t violate Scripture, but engaging in them doesn’t profit anything at all to the Christian life. In fact, many times it eventually causes harm.

For issues like these, let’s consider asking ourselves the following questions based on Philippians 4:8:

If there is ever something we aren’t sure about, let’s ask these good questions about it. If it will likely do more harm than good, or even any harm, to our Christian life and influence, it doesn’t belong in our lives. Even if there isn’t a “thou shall not,” even if it is technically lawful, let’s be sure that it has a distinct spiritual benefit. Doing so will often remove our bias and reveal the moral high ground on which to travel.