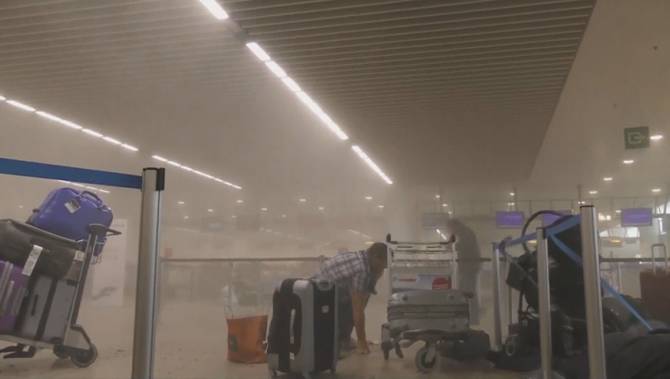 Another attack has occurred. Bombings at both an airport and a subway in Brussels, Belgium have resulted in over 30 deaths and almost 200 more injured. A third bomb was disarmed before it was able to cause havoc. Soon after the bombs went off, ISIS claimed responsibility for the attacks. Since June 2014, ISIS has been responsible for 75 attacks in 20 countries, resulting in 1280 deaths (CNN).

It’s not really a secret; ISIS thrives on a reputation of terror. While the world isn’t crippled necessarily, there is a sense of uneasiness that looms in the reality of these terrorist attacks. However, there is some really good news about terrorism. Those who support and practice terrorism don’t really even know what terror is.

To help us understand, Scripture gives us a view of true terror: “It is a terrifying thing to fall into the hands of the living God” (Hebrews 10:31). There is a day coming when each individual is going to have to answer for the actions he has done (Matthew 16:27). There is a day coming when people are going to have to stand judgment before the almighty God (2 Corinthians 5:10). For those who have lived their lives in opposition to the Bible, like those who have carried out these actions of terrorism, they will come to see just how terrifying it will be to fall into the hands of God on the Judgment Day.

Without a doubt, the actions of ISIS and its affiliates cause a sense of fear. However, let’s keep in mind that no matter what they do to us, they can never separate us from our eternal reward (Romans 8:38-39). Only we can separate ourselves from this (Galatians 5:4; 1 John 1:5-7). In fact, all that these extremists might do is deliver us over to that great reward.

No matter how many more of these attacks happen, let’s keep our fear in the proper perspective. Jesus instructed, “Do not fear those who kill the body but are unable to kill the soul; but rather fear Him who is able to destroy both soul and body in hell” (Matthew 10:28). ISIS and those who practice acts of terrorism will one day come face to face with the Lord and find out what true terror is. As far as we are concerned, let’s keep living faithfully to the Word no matter the pressures and evils we face. Then, instead of a fear at the Judgment, we can rest assured that God will meet us with the words, “well done good and faithful servant…enter into the joy of your master” (Matthew 25:21, 23).