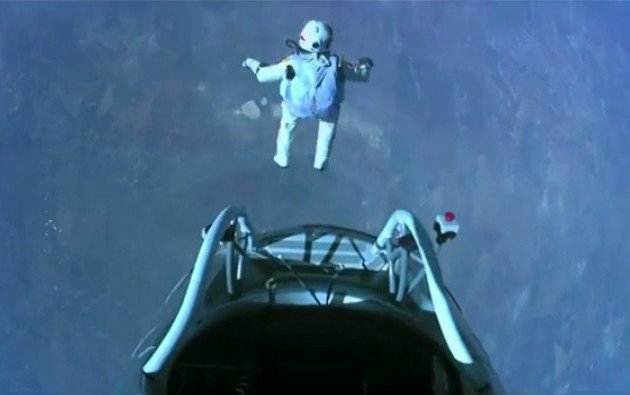 Everyone has a “fear alarm.” You know, the little alarm that goes off in your mind when something seems way too dangerous to try. For some people, the alarm goes haywire just by climbing a ladder. For others, the alarm sounds when eyeing rides at Six Flags, especially the free falling ones. The more adventurous among us ignore those alarms and go skydiving. Felix Baumgartner’s “fear alarm” seems to be completely missing. He took skydiving to a completely different level. Over a year ago, Baumgartner took a little skydiving excursion from about 128,000 feet above sea level. Since he was roughly 24 miles from earth, he was still technically in the earth’s atmosphere, but for all intensive purposes, he pretty much skydived from space. On his was down Baumgartner broke the sound barrier, reaching measly speeds of 840 miles per hour.

Throughout time, people have continued to achieve incredible things. Today’s technology and medicine would have seemed like witchcraft not too many years ago. Since we have advanced so much, people have pointed to an apparent flaw in Scripture. Ecclesiastes 1:9-10 says, “That which has been is that which will be, and that which has been done is that which will be done. So there is nothing new under the sun. Is there anything of which one might say, “See this, it is new”? Already it has existed for ages which were before us.

Bible critics and doubters are quick to point to this Scripture and proclaim, “See, how can you say this isn’t new? When has this ever happened before? Certainly this is ‘new under the sun.’” How can Christians justify this passage?

Being the wisest man to ever live, Solomon would not have made such an ignorant claim without seeing its faults. Therefore, we must conclude that Solomon’s words are not meant to be taken too literally. He isn’t saying that there is not and will not ever be anything even slightly new in the remaining history of mankind. He is saying, however, that there is nothing new generally speaking.

Solomon was right. There is truly “nothing new under the sun.” However, in all of this discussion, let’s not lose focus of what his point is. Solomon is explaining that we all pretty much live and experience the same things in life. Nothing we experience is really new, in general terms. We all go through stages of growth, weakness, ambition, sin, and death. We all look for the meaning of life in wealth, status, comfort, or possessions. All of these end in disappointment. Without God stepping in to help us, we would all be lost and hopeless.

For this reason, Solomon reveals to us what is truly meaningful and significant: to fear God and keep His commandments (Ecclesiastes 12:13-14). We have a choice before us. We can go through the motions, like most will do, and end up unfulfilled and separated from God. Or, we can choose to obey God and live in eternal glory and happiness with Him in heaven. Which will we choose?