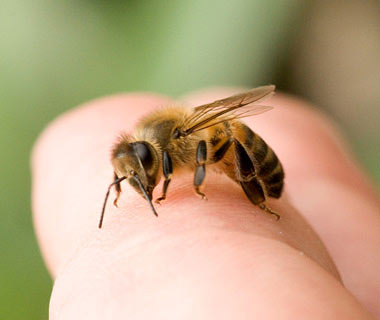 A family was casually driving around sightseeing on their vacation.  It was a warm, clear, summer day and they were enjoying the breeze coming through the rolled down windows.  Soon the peaceful drive was interrupted when a honeybee flew through the open windows and buzzed around the car.  The young girl, allergic to bee stings, squirmed and shrieked as the bee flew close to her.  She called out, “Daddy, daddy!  It’s a bee!  It’s going to sting me!”

The father quickly pulled the car over and began trying to get the bee out of the car.  Unable to do so, and not wanting to anger the bee into accidently stinging his daughter, he cornered the bee against the windshield.  Having the bee trapped, he grasped the bee in his hand and waited for the inevitable sting.  Feeling the sharp pain, he opened his hand and released the bee out the window.  The little girl began panicking again, “Daddy, it’s going to fly back here again and sting me!”  The father gently responded, “No honey, it can’t sting you now.  Look at my hand.”  In his hand was the bee’s stinger.

Like the father did for his daughter, Jesus Christ has taken away death’s stinger for us.  The part that stings in death is when a person dies in sin and apart from the Lord.  It stings because that is the end of life and the beginning of punishment.  However, when we live according to God’s commands in Scripture, death does not need to be feared because the sting is gone.  Death just becomes the beginning of eternal life with the Lord.  Death becomes victory.

Christ made an incredible sacrifice for us by removing death’s sting.  May we always remember and thank God for this sacrifice and for taking away the sting of death.

One thought on “Bee Sting”